It didn’t have to be this way

“There’s a growing body of evidence suggesting that schools can operate safely, at least under certain circumstances. But no country that closed schools has attempted to reopen them with outbreaks still raging as they are across much of America.”

So, now, there are no good answers.

Face-to-face learning brings significant health risks, particularly for a teaching force where 28.1% of teachers are over the age of 50. Fully virtual schooling causes child supervision problems which brings significant labor productivity concerns. And, we know that distance education doesn’t work well for the K-12 set. It’s one of the most coherent bodies of research we have in education, and that’s what we find when we study schools that are purposefully and planfully designed for distance education. Public school teachers will surely do better this fall than they did in the spring, but they are still novices to distance education and constrained in lots of ways.

But, it didn’t have to be this way.

Our nation’s current status with respect to the coronavirus is a tragedy and the result of failed leadership at lots of levels, starting at the top. 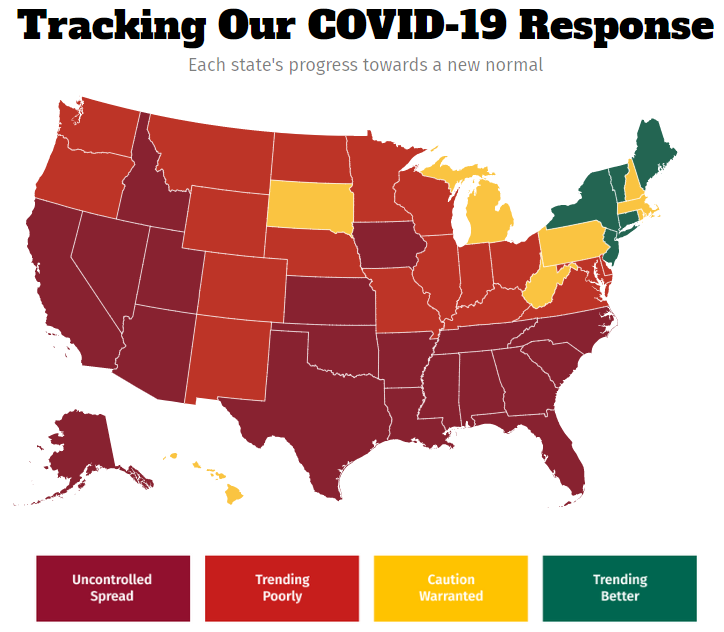 We had it in our grasps… 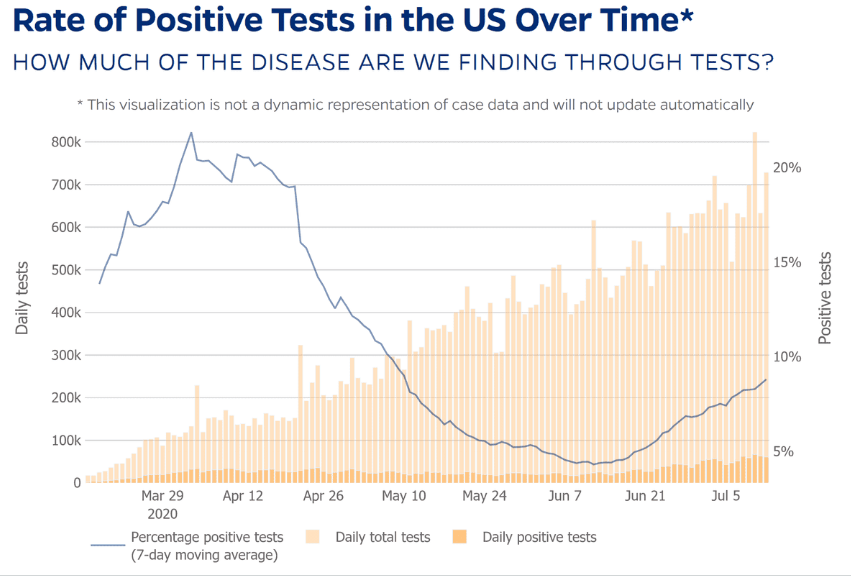 That increase in positivity rates tracks exactly to when states started easing mitigation strategies and “re-opening” the economy. We have a president who is wishing it all away with the support of the governors in the (currently) worst states who are refusing to do what it takes to fight this virus. We chose bars and restaurants over public schools. And, these leaders are buoyed by a media giant that has downplayed the virus and badly (dangerously!) misinformed massive portions of the country.  Our social media giants have done us no favors, letting their algorithms spread disinformation and dangerous conspiracy theories.

We also have a long history of failing to fully fund our public schools. As a result, we have far too many buildings that are in terrible shape. Among other deficits, too many school buildings are overcrowded and do not have good ventilation. Those two problems alone are nearly insurmountable barriers to returning to school buildings as the virus thrives in crowded indoor spaces and is, apparently, airborne in ways not previously known. The physical condition of our schools is a result of many policy choices.

Now, apparently, there are many families who are pooling their resources to hire teachers away from public schools to teach “pods” of kids at home. If this happens at any sort of scale, and kids and teachers withdraw from the public school system, the financial consequences will be devastating. And, the inequities already baked into the system will be exacerbated.

According to the American Association of School Administrators (AASA) and the Association of School Business Officials (ASBO), the average school district will need an additional $1.8 million to re-open reasonably safely. There are over 13,000 school districts in this country. Congress may step up, but President Trump is not only not promising to sign off on federal relief, he actually threatened to withhold all federal funding for schools that do not fully open f2f. (NOTE: Dear reader, he does not have this authority. But, facts are not our dear leader’s strong suit). And, if Congress does step up, we are looking at tens of billions of dollars in federal aid.

It feels like there’s no light at the end of the tunnel. From the very start, we needed mitigation strategies (including social distancing and mask wearing), mass testing, and contact tracing. We did some social distancing, but we grew impatient, apparently. Mask wearing has unnecessarily become a fierce political battleground and only now are federal authorities urging mask wearing. Testing improved, but, to this day, it’s nowhere near where it needs to be. Contact tracing… is it even happening? If so, it’s certainly not a federally coordinated effort.

And we certainly didn’t need a president who was asking questions about whether we can or should inject disinfectant into people.