OUR quest for distinction

Everything we do here at Virginia Commonwealth University is expected to be aligned with our strategic plan, entitled Quest for Distinction. I could quibble with a few substantive aspects of the plan, but I’m fully on board with an organization having a coherent vision and proceeding in ways that are entirely consistent with it. The name of the plan is also an interesting point of exploration. That is, “distinction” is a fascinating word in the context of a strategic plan:

noun
1. a difference or contrast between similar things or people.

“there is a sharp distinction between domestic politics and international politics”

2. excellence that sets someone or something apart from others.
“a novelist of distinction”

As the Interim Director of Online Academic Programs at VCU, I have a unique opportunity to build the Office of Online Education (aka Online@VCU). As I said in my first post here, I have all the support and leadership I could want in “ramping up” online learning at/through VCU. Also, while the Office of Online Education has been in existence for a while, the first Director began earlier this year; there is not much history to this office. Opportunity abounds.

In the early days on the job, I’ve had a number of great conversations with the folks with whom I’ll be working most closely. I recall a recent conversation with Jeff Nugent, my colleague/friend/partner-in-crime, where he said that we need to “organize differently.” I interpreted that to mean that, if we are going to succeed, we cannot and should not be beholden to categories/boxes/silos that typically prohibit forward movement in ways that are anything beyond incremental. I don’t yet know how we’ll organize; I do know that, at the moment, there’s some intermingling between the Office of Online Education (the OOE, “my” shop) and the Center for Teaching Excellence (the CTE, which Jeff co-directs). That intermingling is currently playing out in our physical location as it’s not entirely clear what part of our side of the 4th floor is the CTE and what part is the OOE. We all understand that we live within the Office of the Vice Provost for Learning Innovation and Student Success, and that’s probably enough clarity; I don’t know that we need to be more “organized” than that.

After hearing and thinking about Jeff’s point about organizing differently, and as I ponder our own quest for distinction in our small but growing space within the larger university’s Quest, I have been reading quite a bit about Medium.  The first article I read is about how Medium is building a new kind of company with no managers. Mostly, as one who has been a professor of educational leadership for over a decade, I saw ideas that were not particularly new. Consider this part: “Frustrated with poor results, he decided to go off script. He started spending one-on-one meetings talking to his reports about their lives, instead of their tasks, and productivity shot through the roof.” Well, yeah. Also, the SCARF approach reads like a repackaged version of self-determination theory.

The Holacracy system for organizational governance is new to me, though. It’s hard to imagine how it might work in a large, public institution of higher education. The tenets of Holacracy are: 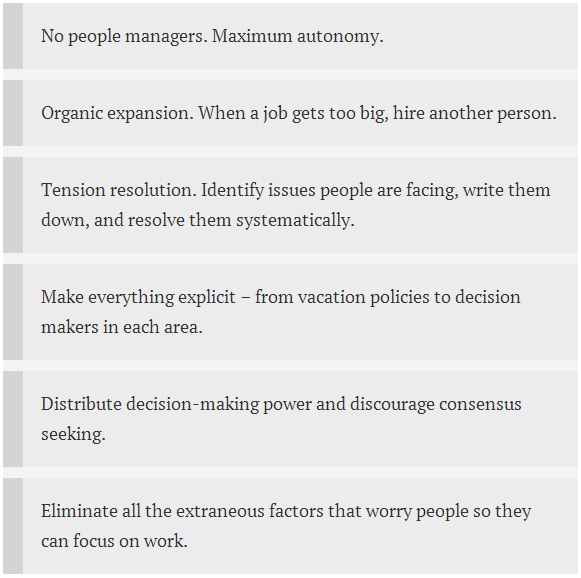 Universities as bureaucracies seem to crave management. And, organic expansion in a public institution is complicated by, you know, laws and regulations (which I understand and support, BTW). So, Holacracy might not work entirely within the constraints of a large, public university. But, I’m intrigued by the distribution of roles and the idea of circles (which makes me think of Google+ circles…).

So, maybe there’s something there that can help me figure out how we can organize differently. But, then there’s that tricky part about “purpose.” After reading that quote, I can’t help but ask: what is the overall purpose of Online@VCU?

Gardner Campbell, my “boss” (I suspect he’s not particularly fond of that word, and he’ll surely tell me if that’s true…), has consistently charged me/us with building (and helping other folks build) online learning experiences that are “distinctive;” he has even said as much in the presence of VCU President Michael Rao. In the spirit and language of our university’s strategic plan, the challenge I face, as I now see it, is how can online learning at/through/with VCU be different and excellent? As I keep asking myself, “why would the hypothetical learner in, say, Idaho want to engage with *THAT* online course/program, and why, specifically, with/through VCU?”

The more recent articles I’ve read about Medium are from technology writers who appear to be trying to help the world understand what Medium is, exactly. Alexis Madrigal addresses the question head on and, essentially, concludes that Medium is a mysterious publishing platform that defies most categories we know. Ultimately, Madrigal wonders out loud about the possibility that Medium defying categorization is exactly the point:

Maybe, though, I’m applying old-line thinking to this new creation. Perhaps Medium can continue to do precisely what it has been doing, and their brand value will continue to grow while these major questions remain unresolved. The center will hold because there is no center. In a world when every post stands on its own, atomistically, perhaps it’s silly to think a publication can’t be incoherent. Maybe a platform can sometimes be a magazine, when it sends out a newsletter of its best content, or when a visitor comes to its home page, but not to an individual story.

What Medium *IS* is, and will continue to be, an interesting exploration that I want to monitor; I think it has interesting implications for learning and learners as a publishing platform. That it may just be something “different” helps me think about how we can be different. And, excellent. That’s all I have for now: we want to create online learning experiences that are distinctive; they are different AND excellent.

I welcome thoughts and ideas as we embark on OUR quest for distinction.

1 thought on “OUR quest for distinction”