Off to the rubber room I go 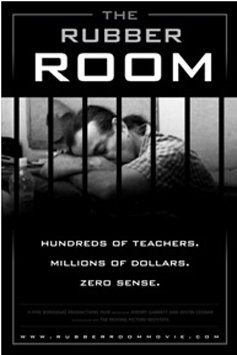 Last week, I was “reassigned.” Not only was I told that my contract wouldn’t be renewed for next academic year (which I expected), but I was told that “effective immediately,” I’d be sent to an empty office in another building1 to do “special projects” between now and the end of my current contract (August 15, 2017).

Now, before you get all, “Awwww, Jon, that’s horrible…”, please know that it is horrible for many reasons, but that, ultimately, I’ll be just fine2. I am a tenured associate professor in the Department of Educational Leadership here, and I have the option of returning to that position starting on August 16, 2017. As of now, I have every intention of triggering that option.

But, for now, it’s off to the rubber room. Not a padded room in a psychiatric ward, though I will likely be banging my head from time to time.  You may be familiar with the documentary The Rubber Room, about the New York City Department of Education’s infamous “reassignment centers” I’m not under any kind of investigation (that I know of), but it seems to be fairly standard operating procedure (at least around here) to send people on terminal contracts to the hinterlands. I think the theory of action here is that we don’t want bitter, angry lame ducks to poison the culture of a unit. That strikes me as coming from a very pessimistic viewpoint about human beings, but, hey, this is probably why my leadership is no longer wanted; I tend to trust people.

I’ve written versions of this post in my head for the last 4 days. The different versions contain more or less information about how this all came to be. Ultimately, I’m choosing not to say very much #onhere because I don’t feel safe doing so. And, THAT should probably tell you most of what you need to know. My reassignment letter has all kinds of language about acting in a “professional” manner with specific references to our codes of professional conduct. The irony, perhaps, is that I am tenured and *should* have the associated academic freedom to share my thoughts on how I got to this point. But, the truth is that I’ve been reassigned having never received anything but strong performance evaluations and having been given no reason for the immediate reassignment other than “we’re going in a different direction.” So, in an environment like that, I choose, for now, to not divulge specifics. Maybe, someday, I’ll find my tenure/scholar-activist voice and point out what I see and feel are injustices. Maybe. Some. Day…

Shortly after being notified of my reassignment, I read the Rolling Stone interview of President Obama on the day after the presidential election. The interview includes the following exchange wherein the author asks the president about the election:

But aren’t you feeling chagrined, pissed off, upset, dismayed?

Well, I … no. You know, I don’t feel dismayed, because, number one, I couldn’t be prouder of the work that we’ve done over the last eight years. When I turn over the keys to the federal government to the next president of the United States, I can say without any equivocation that the country is a lot better off: The economy is stronger, the federal government works better, and our standing in the world is higher. And so I can take great pride in the work we’ve done. I can take great satisfaction in the people we’ve helped.

I think that’s the diplomatic Barack Obama because I think it’s possible to be both dismayed AND proud of the work that’d been done. Actually, I don’t just think it’s possible, I know it’s possible because that’s where I am; in fact, I’m pissed precisely because I’m so proud of all of the good work we’ve done over the last few years and because I no longer get to work with our team of awesome people. We did SUCH. GOOD. WORK. In less than 3 years, we built an award-winning team that inspired other universities around the country. We built AWESOME. LEARNING. EXPERIENCES. SO. MANY. INTERESTING. COURSES. Our open faculty development efforts yielded MULTIPLE (OPEN EDUCATIONAL) RESOURCES. But, that all started two provosts (in less than 3 years) ago, and the current provost and her leadership team want to go in a different direction. So be it.

And that other direction has me shipped out immediately such that I don’t get to work with the few awesome people that are left here in ALT Lab. So, yeah, unlike the POTUS, I’m also pissed and I’m sad. But, again, I’ll be fine3. I worked my ass off for almost 10 years at two universities4 to earn tenure, and I’m glad I get to lean on it now. I officially became a tenured associate professor on July 1, 2013 and then started in this administrative and professional faculty position on July 25, 2013. So, I only got to live life as *just* a tenured associate professor for 24 days. Come August 16, 2017 (my 20th wedding anniversary, BTW), I get to go back to that status. And, between now and then, I get to think about a new research agenda. And I get to try to find my tenure voice.

6 thoughts on “Off to the rubber room I go”