The innovation baby and the ed. tech. bath water 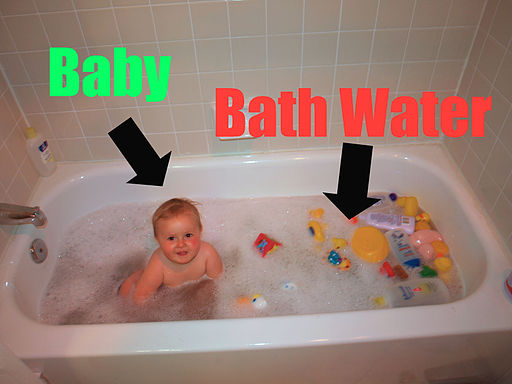 I encounter a lot of resistance to the work that I do. It comes in many forms, and in many spaces. It happens within my workplace and out in the larger world. It happens online and offline. The resistance ranges from subtweets from colleagues within my institution to articles and op-eds by prominent scholars in mainstream media.

One easy way to approach this is to put my head down, put my blinders on, and just do the work that I believe matters. On most days, I can do that. I could also stop following, reading, and engaging with the critics, but that would open me to claims of living in an echo chamber. Generally, I’m in agreement with George Siemens about being willing to “…listen to the critique and insight that smart people have to offer” and I think hard about “… our obligation to pursue questions about unsavoury [sic. “Canadian”] topics that we disagree with or even find unethical.”

What I’m struggling with lately is that I’ve come to believe that in about 98% ((with a margin of error of about 2.7%)) of the cases, the critique and the resistance comes from people with whom I am almost entirely in violent agreement with. That is, we all believe that students deserve amazing learning experiences, irrespective of modality. We all believe that the “disruptive innovation” narrative is a bunch of hooey, particularly as applied to higher education. We all have serious concerns about privacy and student ownership of data. And, frankly, we ALL think that much of what passes as “educational technology” today is crap.

My fear though, particularly lately, is that the resistance will cause us to throw the learning innovation baby out with the ed. tech. bath water.

In other words, where I think I part ways with most of those who actively resist the work that I do is that I also see hope and possibility and affordances of modern (particularly digital) technologies to design those amazing learning experiences we all want for students.

Yet, it seems to me that many would limit that research and development to pretty much anything but teaching and learning.

A couple of years ago, the fine folks with whom I work came up with a new name for the team, the Academic Learning Transformation Lab. The “Lab” part was inspired by places like the MIT Media Lab, but it was also a nod to the idea that we are an academic unit within a research university and that we would explore new opportunities for improved teaching and learning practices, particularly those that involved technology-enhanced active learning. That is to say, we do faculty development and we are also an R&D shop. In the beginning of this year, in a provocative Inside Higher Ed. piece, Thomas Carey asked Can a Teaching Support Center also be an “Innovation Incubator”? At the time, I strongly believed the answer to that question was “Yes, yes it can.” After all, that’s what VCU’s ALT Lab was all about. I use the past tense there because our future is very much up in the air right now; most signs suggest that we’ll be told that a teaching support center at VCU can’t also be an innovation incubator. It’s not clear that there will be any space here at all for a teaching and learning innovation incubator. The resistance has won. That would be a terribly unfortunate development at a place that holds itself up as a “premiere urban research university.” But, at this point, that’s not up to me.

So, about that innovation baby…

A while ago, I started what was to be a weekly blog series documenting some interesting products/practices/services/ideas in education. I didn’t get that far in the series, but not because I was running out of possibilities; I just began to prioritize other aspects of my work. Yet, I still look back at a number of those examples and marvel at the possibilities they conjure. Here at VCU, we’ve accomplished a great deal in just a couple of years. Tom Woodward put together a site that points to a number of examples of what our explorations with VCU faculty and staff have yielded. That site doesn’t cover all that we’ve accomplished; not by a longshot. Documentation is hard. Here’s Tom’s Diigo bookmarks related to VCU. Molly Ransone and her creative crew have worked with faculty to explore the power of various forms of media, especially video. You can see the results of some of that work on our YouTube channel. The course trailers that are on Vimeo are part of our efforts to help nurture curiosity through course selection/registration. Enoch Hale, and now Mike Forder, has/have worked with faculty members to explore the idea of learning spaces and to consider deeply what it means to teach and learn in a space not configured like a traditional classroom. A few of us have taught online courses in ways that respect active, student-centered learning. Here’s Lisa Phipps’ course on Complementary & Alternative Medicine. I could go on… And, we have failed a number of times as well. I don’t believe we’ve ever failed in ways that hurt students; by failure I mean efforts we undertook that never got any traction with faculty. For example, along with a faculty member in the Department of Focused Inquiry, Tom built a site to explore the VCU Common Book (Dave Eggers’ The Circle, at the time) in new and interesting ways that might even generate some insight into the major themes of the book. As Tom wrote, the site was a way “to take advantage of reading as a community, to knit together the many conversations people are having in many different places.” How’d that go? Mostly crickets… But, that’s the nature of innovation; that’s the nature of research and development.

Yesterday, I read an article about an artist who was dismayed by what she saw as inaccuracies and false claims made in the George W. Bush Presidential Center in Dallas. So, she developed an augmented reality app that allows users to point their phones at 10 “trigger images,” and to read a “more balanced view of the information presented.” I couldn’t help but think about what it would mean for students to use technologies like AR to help fact check the world.

Last week, I happened upon the Washington Post piece about the history of the Run DMC – Aerosmith collaboration and wanted all of our students to explore what digital technologies afford for multimodal composition. That kind of powerful publishing and composition is only possible because of new web-based and other digital technologies.

There is no shortage of ed. tech. products and services that should be avoided; they are not helpful at best and malpractice at worst. However, my larger point of writing this post is that, in my mind, there has never been a better time to be an educator or a learner. There has never been a more exciting time to explore opportunities for new or improved educational practices based on advances in technical practice (“know-how”). And, in fact, I believe we are absolutely obligated to engage in those explorations at a research university. So, to the resistance, I ask, humbly, let’s please explore our common ground and let’s not throw the learning innovation baby out with the ed. tech. bath water.

Douglas Engelbart begins the Introduction to Augmenting Human Intellect: A Conceptual Framework by offering some definitions. He writes: By “augmenting ...

Last week, at Educause 2015, I had the privilege of sharing the ALT Lab story alongside Gardner Campbell, Tom Woodward ...