Jonathan D. Becker, J.D., Ph.D. Uncategorized There are German words for that

There are German words for that

A couple of days ago, I used my Tweet of the Day post to share a short video of a speech given by German Chancellor Angela Merkel. In that speech, Merkel (further) distances Germany (and basically the EU) from the United States under Trump. This is a pretty bad development, though not entirely a new one. David Frum does a nice job of documenting how our relationship with Germany has evolved since WWII. Frum has also recently written about why damaging our relationship with the European Union is so problematic (SPOILER: it’s not just about seeming to cozy up to Russia, though that doesn’t help…).

I’m no expert on international relations, so I don’t intend to pontificate in that space. I’ll leave that to Frum and others.

For me, the Trump administration’s international relations strategy (if, in fact, you believe this administration is capable of strategic thinking) is at least consistent with how he campaigned. America First, right? Furthermore, it is consistent with what we’ve seen from the Trump administration on domestic policy. First, we had the legally dubious “travel ban,” and more recently we have a budget proposal and the American Health Care Act. What do these all have in common?

Shortly before the election I remember reading a tweetstorm or a Facebook post wherein someone was explaining how they were trying to convince a friend or a relative to not vote for Trump. I don’t remember the exact words, but it was something to the effect of, “I’m not making much progress because I just don’t have to words to convince him/her to care about other people.” That’s not a terribly novel insight, but it stuck with me. And, to me, this is the common thread across all of the Trump administration’s “policies.” Unless you are white, male, cisgender, heterosexual, able-bodied, at least middle-class, and Christian, we don’t care much about you.

Tying this back to Merkel and Germany, as per usual, there are German words for this: Gemeinschaft vs. Gesellschaft. I’ve written a bit about these concepts, and here’s the basic distinction:

In 1887 Tönnies (1925) first introduced the terms Gemeinschaft and Gesellschaft, which have since served as meaningful and helpful constructs in our understanding of the concept of community. The terms are often used to describe distinct yet coexisting types of interactions or ways of living. “Gemeinschaft describes binding, primary interactional relationships based on sentiment; while Gesellschaft describes an interactional system characterized by self-interest, competition, and negotiated accommodation” (Christenson, 1984, p. 160). Or, as Craig (1993) states, “Gesellshaft refers to an impersonal, rule-oriented and contract-bound institutional structure or arrangement. Gemeinshaft refers to the more personal, caring, purposeful, and sharing type of institutional structure” (p. 305).

Like most sociological theories, these constructs have been discussed, debated, revisited, etc. Yet, I find the ideas particularly helpful in my efforts to understand our social relations in this country, particular in recent times, and especially as journalists and political scientists report about Trump voters in rural areas. I tend to agree with Richard Florida that these stories present a grossly oversimplified narrative. (Click through for the whole tweetstorm)

1 A little tweet storm on the WSJ Journal rural areas are the new distressed urban areas stories. It’s a good compelling story but …

Similarly, Tonnies work on Gemeinschaft and Gesellschaft has been, at times, oversimplified. As I wrote:

Much of the sociological research that incorporates the terms treats them as opposite ends of a spectrum. Typically, that spectrum is geographical in nature with gemeinschaftliche (rural) ways of life “dissolving in a linear, unidirectional fashion” into the gesellschaftliche mode “because of progressive industrial development” (Christenson, 1984, p. 162). It is not clear, however, that Tönnies envisioned such a linear, zero-sum relationship. Rather, one might read Tönnies as suggesting that gemeinschaft and gesellschaft are different types of social relations and that contemporary society can and should reflect complex forms of both. “[I]ndividuals will emphasize one type over the other because the ideological basis for the orientations tend to be fundamentally divergent; yet both, in their own way, contribute to social order” (Christenson, 1984, p. 163).

In other words, for me, these constructs are best understood with respect to social relations instead of geography. To that end, in 1984, Christenson developed indicators of social relations that could be used for empirical research. Here are the results of his analysis: 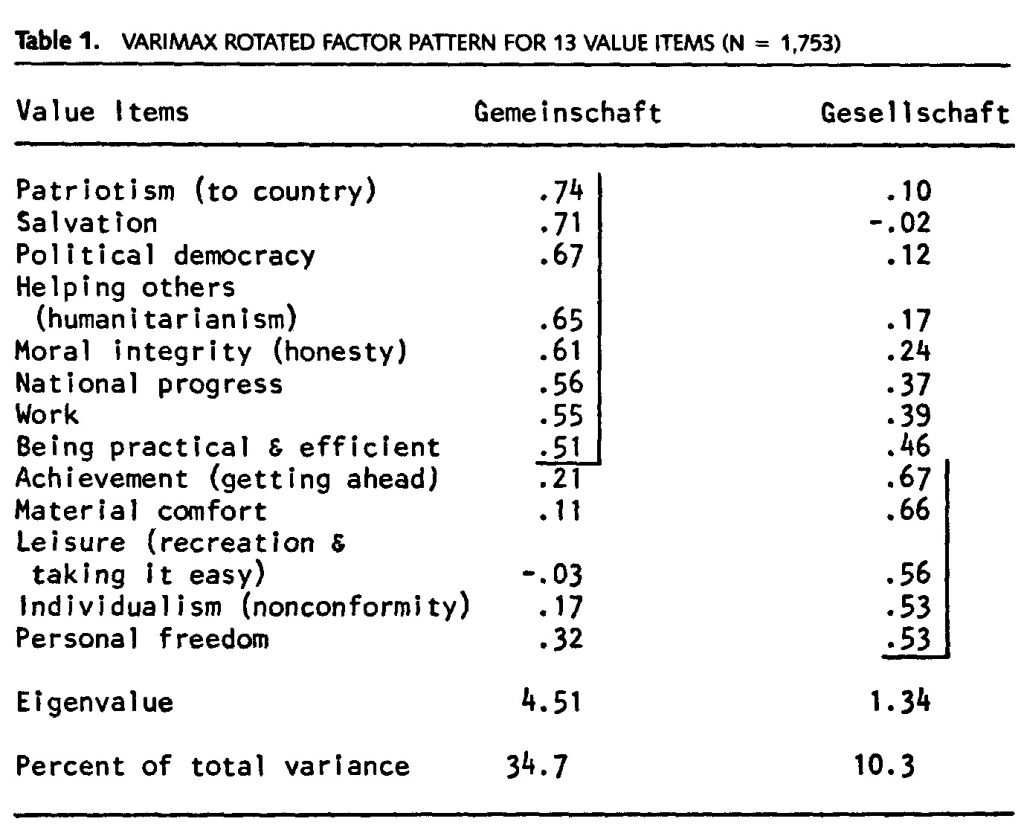 Community bonds + Commonwealth vs. Individuality + Freedom. That sounds like the schism in social relations I see across our country now. It’s certainly noteworthy that the Freedom Caucus seems to be driving the health care policy issue right now. “Freedom,” in Paul Ryan’s mind, is not having to pay for the care and welfare of those less fortunate; it’s the government not making us chip in for the care and welfare of others. Trump’s budget proposal guts the safety net (they call them “entitlement programs”) in favor of individual and corporate tax cuts. Freedom! From an international relations perspective, it’s “America First” and nationalism and a breaking away from the European UNION; God forbid any semblance of commonwealth should prevail in the global order.

Christenson’s scales aren’t perfect and I suspect they’d look a bit different now than they did in 1984. For instance, I think it’d be interesting to see where religiosity/salvation falls now. By many accounts, Evangelicals, for instance, have completely gone away from the ideals of community and commonwealth in favor of individual freedom in the form of religious freedom (and tax cuts). It’s also interesting to note how patriotism is associated with Geminschaft instead of Gesellschaft. I think the generally held view is that those who favor individuality and freedom and who fully support the military are the true “patriots.” But, I think this is false. In my view, those who see us as a true democratic republic, as a commonwealth, are the ones who really believe in what the United States of America IS.

This post went longer than I thought it would, but I wanted to share my thinking on the real divide that I see in our country now. Back in 2004, after George W. Bush was re-elected, Thomas Friedman wrote “We don’t just disagree on what America should be doing; we disagree on what America is.” I don’t much care for Friedman’s writing, but I encourage you to read his NYT piece Two Nations Under God and see how it feels in the wake of the 2016 election. And, then think about the German words Gemeinschaft and Gesellschaft. What kind of country are we? Do we care about other people?

I have long struggled to imagine myself writing a book. Even as an “academic” for over 15 years, writing a ...

When the going gets tough… I get reading. That’s how I cope and it’s how I spent much of my ...

[And now for something a little different… After reading a number of articles/posts ranking the (now) 13 Marvel Cinematic Universe ...