On why I didn’t invite my students to a #BlogParty 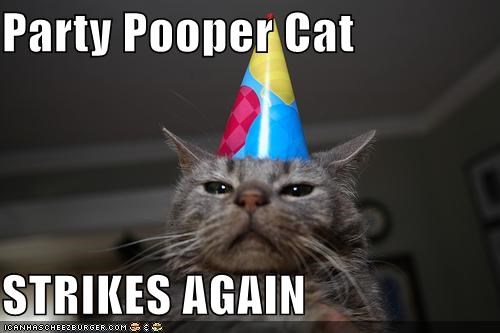 Each of the 6 instructors in our UNIV200 digital engagement pilot (aka Inquiry and the Craft of Argument, aka Living the Dreams: Digital Investigations and Unfettered Minds, aka #thoughtvectors…) is leading students through the learning experience a little bit differently. There are some core elements of the design of the course that are constant across all sections, including the (final) inquiry project. In fact, as a side note, I learned yesterday that one of the students in my section will be teaming with a student in another section of the course on the inquiry project. That’s pretty awesome.

In the first 5 weeks of the learning experience, all students in all sections are engaging in “concept experiences;” web-based activities that bring to life a key concept articulated in an essay or article written by the specific computing pioneer who is the subject of the week’s reading (and writing) assignment.  For example, when students read “As We May Think” by Vannevar Bush, they “experienced” the concept of associative trails by documenting their associative trail during a web surfing/expedition (i.e. they navigated around the web for a bit, took a screenshot of their browser history, and then reflected on it).

This week, students are reading “Computer Lib / Dream Machines” by Ted Nelson. To get at the idea of an “ultra-rich environment” and to explore concepts around information retrieval/curation that Nelson more than hints at, the instructors discussed implementing a Twitter-based activity. Jessica Gordon’s section is doing this. So is Bonnie Boaz’s section. Same with Ryan Cales and Jason Coats. I chose not to engage my students in this particular concept experience1.

I come to this a little jaded, burnt perhaps. On a few occasions, I have asked/encouraged/prodded students in online courses to engage with Twitter. I’ve watched other professors integrate Twitter into courses. I’ve tried to get other faculty members involved through sustained faculty development initiatives. Based on these experiences, I currently believe that “mandating” use of Twitter as part of a singular “assignment” doesn’t work; in fact, I’d argue, it misappropriates Twitter as a connected learning tool.

Twitter is ephemeral, and it blurs lines between a synchronous and asynchronous communication medium. If I send a reply to an account on Twitter, I might get a response right away or I might get a response an hour or more later. I might get no response. One needs to be comfortable with, and even eternally cognizant of that uncertainty. Additionally, Twitter works best as a connected learning space when the user has the time to develop a network that is not undirected; that is, there is some reciprocity between nodes on the network. Combing those two points, consider the Twitter user who poses a question or request on Twitter. How soon a reply comes, if at all, depends on lots of things, including the nature of the request, how “connected” the user is, time of day relative to others on a users network, etc.  It simply takes time as a Twitter user for this to make sense; it takes time for Twitter to become a meaningful tool for connected learning. By inserting it into the middle of a course as an exercise doesn’t recognize this ephemerality and uncertainty of the medium.

In addition to issues of time, part of what makes Twitter “work” in a connected learning sense is dispositional; it’s about the stance of the user. A related condition is that Twitter is most useful and meaningful when the user adopts certain tools and habits.  How one engages with Twitter matters, a lot. “Doing” Twitter on the web through Twitter.com is very different than using, say, a columns-based application such as TweetDeck. Twitter on a mobile device is different. Twitter apps that automatically refresh are different than when the user needs to click/swipe to refresh. Tool choice notwithstanding, Twitter habits matter, too. How often do you “check” Twitter? When I’m working at my desk, I have Janetter (my Twitter client of choice for desktop) open on one of my monitors (I have a dual monitor setup that I’m certain many don’t have). When do you “check” Twitter? Do you use Twitter on a mobile device? As you’re walking from meeting to meeting (or whatever walking you do), do you sneak a peek into your Twitter timeline? That’s a very different approach than the Twitter user who “checks” Twitter once or twice a day; it’s a different experience. Until one gains experience and has the time to develop these habits and attitudes, Twitter can easily seem fairly useless.

Twitter is not a complicated tool to use; to get the most out of Twitter, however, takes some patience, tinkering and deliberation. There’s something of an interaction effect between the ephemerality, the character limit, and the tool choice that gives Twitter a complexity that makes it hard to grok right away.

However, for this particular course, at this particular moment in the course, I’ve chosen not to incorporate Twitter into the concept experience. I do very much wish for my students to take the time to tinker with Twitter as a connected learning tool. I even made a video that I shared with my students where I tried to make the case for why they should use Twitter (see below).  Should, however, is different than must.

This is my argument, and I’m sticking to it… for now. I’m watching the #thoughtvectors stream and open to being wrong.