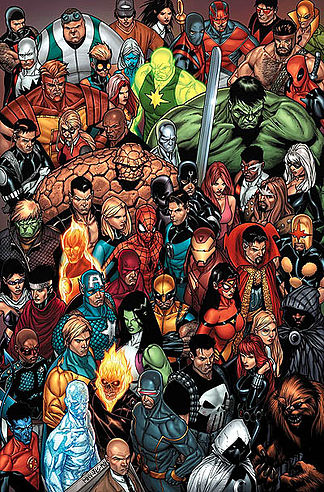 [Warning: I’m about to partake in the most banal form of edublogging: observe a phenomenon –> wonder how it might apply to education –> blog it out. But, it’s my blog and I’m in a bad mood. So, deal with it…]

I was not a big comics or superhero guy growing up. I read a few of the Archie comic books my sister bought with her allowance, and I remember watching Super Friends pretty regularly on Saturday mornings. I also watched some Batman re-runs on TV, and enjoyed Christopher Reeves as Superman in the movie theater. But, that was about it for me and comics/cartoons/superheroes.

Now, though, my (recently turned) 11 year-old son is a huge fan of all things Marvel. If you haven’t read his guest post wherein he ranks the movies from the Marvel Cinematic Universe, well, why not? (Go ahead… this post will still be here when you get back). He’s WAY ahead of me in his exploration of all things Marvel, but I’m learning as fast as I can alongside him. Lately, we’ve been catching up on episodes of Marvel’s Agents of S.H.I.E.L.D.1

As I learn and explore by his side, one thing that continues to intrigue me is the idea of a Marvel “universe” or “multiverse.”

The Marvel Universe is the fictional shared universe where the stories in most American comic book titles and other media published by Marvel Entertainment take place. Marvel superheroes such as Spider-Man, the X-Men, the Fantastic Four and the Avengers are from this universe.

The Marvel Universe is further depicted as existing within a “multiverse” consisting of thousands of separate universes, all of which are the creations of Marvel Comics and all of which are, in a sense, “Marvel universes”. In this context, “Marvel Universe” is taken to refer to the mainstream Marvel continuity, which is known as Earth-616 or currently as Earth Prime. (Source: Wikipedia)

If you click on that “shared universe” link, you’ll see the following sentence: “A shared universe or shared world is a set of creative works where more than one writer (or other artist) independently contributes a work that can stand alone but fits into the joint development of the storyline, characters, or world of the overall project.” A few sentences later, we get: “The term has also been used in a wider, non-literary sense to convey interdisciplinary or social commonality, often in the context of a ‘shared universe of discourse’.” A “shared universe of discourse” sounds a lot like a curriculum, which is defined both broadly and narrowly, but which typically comes to mean “a course of study” and/or “the knowledge and skills students are expected to learn” along with the learning artifacts (content, assessments, etc.) associated with that course of study and that knowledge and those skills.

The formal college curriculum, at least at the undergraduate level, is typically broken into three parts: general education (not usually much more than a checklist of courses for a student to choose from), the major, and electives. General education is, by design, usually not a shared universe of discourse. A student might take a course in the math department and a course in the English department. There’s value in that kind of liberal education, but there’s rarely, if ever, anything shared across the experience of those two courses. The major is where you might expect to see more of a shared universe of discourse, and some departments do a better job of this than others. But, my experience has been that major programs of study are not much more than a series of courses strung together; there’s not much continuity or spiraling of the curriculum2. This lack of continuity and/or coherence is particularly evident where courses are taught by TAs and/or adjuncts who are not privy to departmental program planning and development meetings and conversations. In graduate school, I would argue, this lack of continuity/spiraling is particularly prominent. Far too many graduate programs, especially online programs3 built on the back of adjuncts, are conceived of as a series of courses taught without much consideration to how they form, in combination with extracurricular activities, a rich, coherent, continuous program of study.

But, the Marvel universe as a shared universe of discourse feels much more rich and integrative than what we typically see in formal educational settings. In the Marvel universe, there are print materials (books, comic books, etc.), TV shows, movies, and an increasing array of web-based resources. That might be true for any discipline; learning resources and artifacts (the “what” of the curriculum) are available on multiple media. But, it’s how the storylines and characters and platforms intermingle in the Marvel Universe that has me thinking about how we do “curriculum” in formal educational settings. It’s how the TV shows references the movies and vice versa; it’s how the characters show up in different parts of the universe. If a shared universe is “where more than one writer (or other artist) independently contributes a work that can stand alone but fits into the joint development of the storyline, characters, or world of the overall project” then how does your curriculum or program of study hold up to that idea? I get that scholars within a discipline independently contribute works that can stand alone but that also fit into a discipline’s overall narrative, but here are some questions that come to mind:

Finally (for now), I’m continually amazed by the informal, extra-curricular resources that are developed by the “consumers,” and the web-based participatory culture that has developed around the Marvel universe. For instance, my son spends hours each day on the Marvel Cinematic Universe wiki. There are fans that are constantly adding new content to the site and new discussions emerging all of the time. When we saw Captain America: Civil War recently, and when he read commentary by fans on the wiki, and it lead to a number of long, deep conversations about the role of government and libertarianism and privatization, I knew that my son’s fascination with the Marvel universe was more than just OK. He had immersed himself in a shared universe of discourse that was deeply engaging, integrative, rich, etc.

I suppose this is where I’d point to connected learning, but that’s a sore subject for me right now. For now, I just want to think about how we can create marvel(ous) and universe(al) educational experiences for all young people. I know there are folks out there that are both smarter than me and who understand these universes better than me, and I hope they’ll comment here to expand my understanding and that of others.